Dear followers of 'Hyperborea Exists', another week I address you to share with you my knowledge in history, archaeology and mythology. Once said this let continue with my lessons about History of Nordic Mythology. This week we will talk about the myth sources and It's history. From where we have taken what we think we know about mythology and who where the main actors that allowed us to know about rites and cultures that existed centuries or thousands of years in the past. 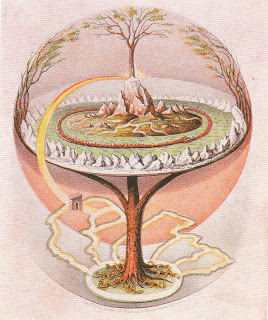 Yggdrasill, the world tree. The big world tree embrace all universe layers: heavens, earth and hell. Bifrost bridge, that humans see as a rainbow, links the real world with the supernatural one. Close to the tree roots live the Norns, the fate.

A great part of the information that is hold by scholars about Pagan mythology from ancient Nordics comes from a relative small number of written sources. One is the compilation of hero and mythology poems known as 'poetic Edda' that was gathered by unknown authors from different sources, probably around beginning of 13th century. The second source is 'prose Edda', written by Iceland politician Snorri Sturluson (1179-1241), just after finishing of 'poetic Edda'.

Sturluson had a busy politic life, and earned great sums of wealth and influence. His 'prose Edda' it's a guide for the conventions followed to create traditional Iceland poesy, written to take profit of the wannabe poets. From his four parts, the two most important sources of information are the 'Skaldkaparmal' and the 'Gylfaginning'. In this last one, a fiction king, Gylfi, arrives disguised to Asgard, the god's city, to learn from them and their wisdom. Odin appeared in front of the king Gylfi with three different disguises and tells him the history of god's tales. Snorri Sturluson was really inspired from 'poetic Edda'  to gather some of the myths included in 'prose Edda'.

Only occasionally we are offered small views from the Germanic mythologic tales outside Scandinavia, but in this case we have to take into account too that they were normally gathered by Roman writters with a limited knowledge of the Germanic specific nature or by Germanic writters converted to Christianity.

Roman historian Gayo Cornelio Tácito (c.56-120) offers us one of the most ancient references to Germanic myths. He wrote a brief ethnographic studio, called 'Germania', about Germanic people that lived outside Roman Empire in these times. In his argument about the different goddess it's clear the problem of gathering another culture from which you have small knowledge. 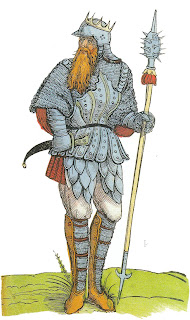 Mannus, the first Germanic king, from 'Origin of the first twelve kings and princes of the German nation, 1543. According to Tácito writings, Mannus was the father of the three Germanic tribes of the Ingaevons, Herminons and Istaevons. In the oral popular tradition; god Heimdall created three social classes after passing three nights with a different couple. Childs born from these unions were slaves, free men and noble men.

As an example, in chapter 9th, Tácito concludes that the Suevs worshipped a goddess similar to Egyptian goddess Isis because seemed that ships were part of the cult.   It's more probable that the goddess was Nehalennia, who was worshipped particularly by Frisian in the Frisian islands of the Northwest coast of Germany in the third century. Nehalennia appears in some votive stones in remote places like Cologne, west of Germany. Some of the inscriptions talk about her sponsorship to trade trips, that describes her as a the trade trips goddess for Frisian. Suevs lived far away of coasts, so they have nothing to be with a goddess related to the sea. However, Tácito gave us a lot of useful information, and this mention to the goddess, despite being wrong, its valuable thanks to being rare.

With that we arrived to the end of this issue, for next one we will go deeper in the Germanic creation myths following the information gathered by Tácito among others and will check the Ancient Nordic Cosmos Tales and introduce the two families of Nordic gods.

As I told you last week I'm still really busy, I have almost no free time to breath or think, just the opposite of what I need as I should focus in my biggest investigation, but I will have to delay it until I can pass this stage of work and social compromises.