History of Nordic Mythology I: Introduction 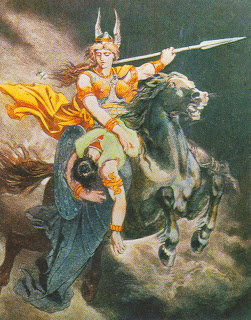 As I promised you in my last update today I'm going to start a new series of chapters where I will introduce you to the origin and history of Nordic mythology. Some could think that has nothing related to Hyperborean myth, but believe in me when I say you this: they share a very important link between them. That's the reason I think its important to introduce you to these basic info before we go deeper in my investigation. Part of the information included in this update and the next ones can be found in the book 'Mythology: Myths, Legends and Fantasies from Global Book Publishing, it's a great book to be introduced in the mythology from all around the world.

To speak about Nordic mythology, we have to talk about the Germanic one, as they are very similar. Both of them include the myths and religious believes from the Germanic tribes from North Europe raised from the pre-history to the beginning of the Iron Age, that's the year 500 A.D. It's origin keeps being a reason to discuss but there were well differentiated groups when they had contact with Roman Empire for first time. In north there were the Anglos, Saxons, Juts, Danish, Swedish; in Northwest , the Francs; in the South west, Suevs; in the North-east, Vandals; and in the East, the Goods. Tribes spoke different languages  and weren't based always in the same group, they could be formed by different smaller tribes. For instance, Germans probably were Suevs or were splited from them, and their language, the Germanic, its the dialect of the high Deutsch that is spoken in Suabia (from Suevs), current Germany.

During the first millennia after Christ, mainly during the decay of Roman Empire, Germanic tribes-most of them remain as semi-nomads- extended across all Europe. The Goods  that were divided between Ostrogoods and Visigoods, moved to the South running from the Hunes raids, and finally they settled in Spain.

In general terms, and despite that few is known about their religion, Germans were pagan people that worshipped tons of gods. Due to the geographical dispersion, religion evolved in different way either for local needs or expositions to external influence (specially pagan Roman and the Christian, but Slavic and Celtic too). For all that, it doesn't seem to exist an unified German mythology.

With the exception of several runic inscriptions or draws in stones, the writing didn't evolved as a way to store the historic achievements, were the poets and minstrels or scalds, as they were known in the Scandinavian countries, were the ones in charge of transmit the myths following oral tradition. For that, in great way, German myths were retrieved by others.

For today this is all, despite I returned to Madrid just to enjoy the end of the year with Maria's family I'm still busy checking all the date compiled in Oslo with my mates from NTNU. I'm very excited with what we have find out but it's still soon to make any public statement about it. That's the reason that in the following weeks I'll be focused on that and meanwhile I'll be posting the new chapters about the Nordic mythology that I had already prepared.

In the next chapter we will follow the Christianise and it's impact in the Nordic mythology.
Posted by J. Hågensen at 2:56 AM