History of Nordic Mythology IX: Freyr and Gerd, the giant

Dear 'Hyperborea Exists' followers, I am here again with you to continue with this basic history lesson about northern mythology. Today, I wanted to fully dedicate this update to the tale of Freyr and Gerd, the giant, which I'm sure you'll find as interesting as I do.

The tale of Freyr, Gerd and Skirnir is told in the poem 'Skirnismal', found in the Edda. Snorri Sturluson tells us a shorter and more idealized story in Gylfaginning. This tale begins in Asgard. Freyr, god of wealth and fertility, rests in Hlidskialf, Odin's house, from where he contemplates the rest of the worlds in the universe. Watching over the giants' world he sees Gerd, a beautiful giant, in his father's property courtyard, and instantly falls in love with her. Freyr sighs for her love. 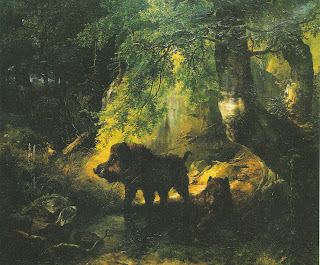 Wild boar and wolf. by Friedrich Gauermann (1807-1862). In the northern mythology, many gods are linked with animals. Freyr's cart is pulled by two wild boars: Gullinbursti, whose hair shines in the dark and Slidrugtanni. In battle, warriors consecrated to the cult of the wild boar fought in wedge formation with their two paladins on front, forming the rani (snout).


They sent Freyr's servant, Skirnir, to ask him what's wrong with him. Freyr tells him, but he believes that his passion is doomed to be left unsatisfied. Skirnir offers himself to travel to the land of the giants and to woo Gerd in his name. He borrows Freyr's magic sword and his horse. After travelling across mountains and skipping a fire ring that surrounds the land of the giants, he reaches Gerd's home, but he finds his way blocked by fierce guardian hounds. Gerd, nonetheless, decides to greet him in his canopy.

Skirnir tells her about Freyr's love and gives her as incentives golden apples and Draupnir, a golden magic ring that multiplies on its own, but Gerd has all the gold she needs and refuses to accept the presents. Skirnir then threatens her (and also her father, the giant Gymir, if he dared to intervene) with killing them with Freyr's sword, but Gerd resists. Skirnir tells her about the curse he will bring down on her if she insists on rejecting Freyr's generous love offer.

The curse will be engraved in runes in a 'taming rod', and according to its terms Gerd will be doomed to a dead life in the land of the giants. Skirnir describes her life under the curse as a mock about the life she would have if she accepted Freyr's hand. She will live in the border of his world, as Heimdall, the keeper of the gods in Asgard does; but whereas Heimdall watches his world to prevent an attack, Gerd will be a prisoner. She will always be looking at the outside, dreaming of an escape that can only lead to her death.

Fro, statue of fertility, Sweden, XI century. The main nordic gods of fertility wre Freyr (Fro) and her sister Freya. They arrived to Asgard with their father after the defeat of the Vanir against the Aesir. It is often said that in Ragnarok, Freyr will be the first to fall, because he lended Skirnir his magic sword in gratitude for his help in achieving Gerd's hand.

Her only beverage will be goat's urine, a prescription with will be even more severe when she remembers that the gods get an excellent mead out of the udders of the goat Heidrun, who browses the tree's leafs all around the world. In this nightmarish world, everybody else will see Gerd as a freak, and if she decided to marry, the best man she'll be able to get will be a three-headed giant called Hrimgrimnir. Her days will be neverending, and she will always be haunted by trolls, who will be her only companions. Tears will come flooding, and desire will take over her with an uncontrollable force.

Gerd only collapses when Skirnir begins to engrave the runes that will make this horrific panorama real. She agrees to find Freyr nine nights after that day in Barri, a place described as a 'tranquil grove'. Skirnir comes back with the news and the poem ends with the god complaining about the amount of time it took Gerd to accept their union.


Although there are many different interpretations, perhaps the most widely accepted is a symbolic reading about the fertility in the fields, according to which Freyr, known before as the god of fertility, represents the Sun, and Gerd, the unfertilized land. Skilnir would be the intermediary whose name means 'the shiny', and represents the rays of the sun, which allow the crops to germinate.


With all this we have reached the end of this chapter dedicated to Freyr. In our next 'Hyperborea Exists' update we will bring in Thor and his hammer, Mjölnir, and his relationship with the Germanic warriors. And, after having taken this step, we will focus on the longest of the related myths about Edda in prose, the one about Thor's expedition to Utgard.

As always, I wanted to thank you for your support and for telling to your friends about 'Hyperborea Exists', we are constantly increasing our numbers and with every new reader I feel more and more energy to keep this project going.


Thank you very much for your support, 'Hyperborea Exists' followers!!!!
Posted by J. Hågensen at 4:34 PM 1 comments

History of Nordic Mythology VIII: Descendant of the gods

Dear Hyperborea Exists followers, I’m here with you again to bring you another chapter of the history of Nordic mythology, to complete this cycle of updates in the blog step by step. Today I’m going to make an introduction to the so-called descendants of the great gods, a series of tales about some of the most relevant mythological Nordic figures after the great father, Odin.

Many Germanic tribes had myths that they linked its reign with the gods. Often it was Odin, the most powerful of them all. One of the most antique and well-known Germanic myths reaches us through the Long Bard historyographs (?) in the VI and VII centuries, and tells us a battle between two Germanic tribes: the Wandali (Vandals) and the Winnili. The Wandali asked their main god, Godan (Wodan or Odin), to grant them victory. On the other hand, the Winnili were led by Gambara, the wise and old mother of their bosses, Ibor and Aio, who prayed to Godan’s wife, Frea (Frigg).

Frea advised the Winnili warriors to stand on the East in the morning of the battle and that their women went with the men to the front, and put their long hair across their faces. Godan had planned to grant victory to the first army he saw at dawn. The next morning, after looking through his favorite window that overlooked the East, he saw the Winnili already set up and asked: “who are these Long Bards?” After he named them, Frea said that he was obliged to grant them victory, and after that name they built their kingdom in what was to be known as Lombardy, on the north of Italy. 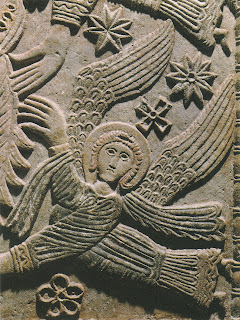 Angel, on an altar of the Lombard king Rachis, VIII century. The Long Bards originally came from the south of Sweden, but they established themselves in Italy and gave name to the region of Lombardy. Some tales explain that, when they became too big in number, the Winnili divided between three groups and draw between them to stay in their territory. The group headed by Ibor and Aio lost, so they left in search of a new land.

In this tale, the authors reveal some influences on their interpretation of the classic couple that governed the gods, Zeus and Hera. But this tale, undoubtedly old, proves that even halfway through the first millennia of our era, Wodan or Odin and his wife Frigg already were the powerful ancestral deities from which the royal Germanic families, along with entire tribes, wished to born.

Although it is Odin the one who always appears as the divine ancestor in the Germanic royal families’ genealogy, at least in Sweden they honored the god Freyr, as ancestor and as guardian and protector of the royal house of the Ynglingar, house of which the Norwegian royal family deducted a while later.

Even when he was often considered as the god of fertility, mostly because the statues in the Viking era and the pocket-held talismans represented him with an erect dick, in reality he was considered as the archetype of the Swedish royal family, represented by the kings of the antique Uppsala (center of the Swedish power in the VI century and later on, and even nowadays a religious and cultural focus). His characteristic virility was surely related to that image of a young and powerful king, just as his attribute, the wild boar, another symbol of strength and wealth.

The soldiers that formed the Swedish royal guard in the VII and VIII centuries had helmets decorated with a metallic wild boar. Their link to the Ynglingar house could be seen even in the nickname they gave to Freyr. Yngvi-Freyr, that maybe is a very antique name that comes from the Germanic tribes mentioned by Tacitus, who they called themselves Ingaevons.

And with this we reach the end of this chapter, the next will have as protagonist the tale of Freyr and Gerd the giant, that is a part of the Skirnismal poem from the Edda in prose by Snorri Sturluson.

I want to use this also to share with you that the Hyperborea Exists page has already gone over the 100 fans. See how every week more and more people show their interest in knowing more about our history and the mythology is something really rewarding.

Thank you so much for your support, Hyperborea Exists followers!

Note. You can find some of the info included in this series of chapters in the book Mythology/: Myths, Legends and Fantasies/ by Global Book Publishing, a great work to introduce yourselves into the general mythology of every culture in the world.
Posted by J. Hågensen at 6:04 PM 0 comments