History of Nordic Mythology II: Christianity and It's impact

Dear followers of Hyperborea Exists, another week I'm here with another issue of our class about History of Nordic Mythology. This time we will go deeper with the Christianity and it's impact.

Germanic tribes embraced Christianity in different moments. When the information about their beliefs was started to be retrieved, most part of it was already lost, be that tribes spread or well moved to new territories. Most of Christians writters used shards and local memory, and then redid the myths with a Christian interpretation that discredit the paganism.

Despite all of that the Goods were already Christians at 4th century, Germanic tribes from North were still apart from the evolution of center Europe, so they were able to keep the biggest number of original myths than any other group. The ancient Nordic tribes, the current Scandinavians -Denmark, Sweden, Norway and Iceland- moved into Christianity during the 10th and 11th centuries. Paganism was still available in Sweden until end of year 1100. 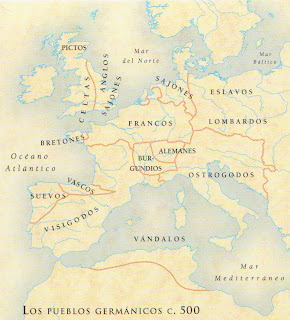 Main Germanic tribes. Since 2nd century, Goods, Saxons, Francs and other tribes already did their raids against Romans, only slowed during the arrival of Huns, around year 350. One hundred years after, after the falling of Roman Empire, there were already many Germanic Empires well defined over all Europe.

That different evolution, together with a more or less contact with other groups, makes that the available sources are really different either in quality or in distribution. The richest ones are stored in the Scandinavian tales , specially in the Iceland stories of 13th century known as 'Poethic Edda' and the little bit late 'Edda' in prose written by Snorri Sturluson (1179-1241).

This Scandinavian mythologic body it's bigger and uniform than the ones from Central and East Germany. Previously, most of Scandinavian, like all Germanic tribes, were politheist Pagans that worshipped a vast number of gods, most of them were equals to other Germanic tribes but having different names.

The most known Nordic gods were Odin, Thor, Freyr, Freya and Niord; however, despite we know their names we have few information about what kind of worship they got. Archaeological findings aim to that they received Pagan rites, but it's meaning is unknown at most. Ocassionally, Scandinavian place names had Pagan gods names, so we can know that they were worshipped in several zones of Scandinavia; however, they say nothing about the Pagan rites and that, increases even more the mistery aura around these gods. It seems like their worshippers didn't wanted that the secret of their cult was known by the people that had to come.

From 13th century and forward, the Island's sagas of the two 'Edda' include tales about these rites, but the late date of these sources -started 300 years after the conversion to Christianity of Iceland, around year 1000- makes that we doubt that they can be trusted. They have the mark of the classic Iceland tale told by their Middle-Age Christians authors, and these sources could show us a picture soo much instructed and sistematic, as these tales show more literary features than religious ones.

Some evidences -quotes in the poems saved from Pagan Nordic poeths from 9th and 10th centuries, and images sources like paintings and runic inscriptions- proof that these Middle-Age Iceland tales could be true, but we have to be cautious before we can assure that they are valid sources from a more extended Nordic mythology.

That's all for today, in the next issue I will talk about the sources of myths and the story behind the Nordic mythology.

If I was already bussy checking all the data from my mates at NTNU in my last visit to Oslo now I have to add that I have to prepare some conferences in Madrid to talk about the Submarine Archaeology and it's potential to find out the misteries of forgotten civilizations. No worries, I won't neither forget you nor his blog as I already have many issues ready abour the History of Nordic Mythology.

See you in the next issue followers of Hyperborea Exists!

Note. Part of the information incluided in this update can be found in the book 'Mythology: Myths, Legends and Fantasies' from Global Book Publishing, it's a great book to be introduced in the mythology from all around the world.
Posted by J. Hågensen at 10:27 PM