History of Nordic Mythology V: From gods and giants

Dear “Hyperborea Exists” followers: one more week I come to you with yet another chapter of the Nordic Mythology. Concretely, this will be the first chapter of what I consider to be the most important part in this
lesson: history of the most important deities of Nordic mythology. To begin with, there’s nothing more important than going inside the relationship between gods and Nordic giants.

Gods and giants are ancestral enemies and most of the myths tell the story of the skirmishes between them. Thor, with his mighty hammer, is a warrior god, the most feared foe by the giants. Myths assure that one
day that enmity will end up in a final battle known as “Ragnarök”, on which the entire universe, along with most of its inhabitants, will be destroyed. Nonetheless, sources announce a new beginning: some gods and
men will survive, and they will altogether begin the rebuilding and repopulation of a better and more pacific world. 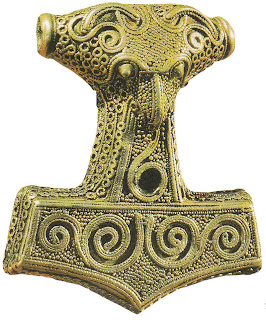 Miollnir (Mjöllnir), Thor’s hammer, amulet, 10th Century, Sweden. Thor used his hammer, associated to thunder, to defend the gods and their world. It always went back to his hand after throwing him away. This amulet, decorated with Thor’s penetrating eyes, would act as a protector fetish.

The next tale is related in a section in “Edda in prose” by Snorri Sturluson called the “Gylfaginning”, and makes reference to the tales King Gylki heard during her visit to the city of Asgard, mentioned in a
previous update. This history speaks of the dishonesty of gods on their treats with giants, which some consider a moral defect of divine society which will lead them to destruction in Ragnarok.

This myth goes through the principles of mythological past, after the gods created Midgard and raised the big Valhalla hall. A Builder introduces himself and offers to build up a fortification effective against the mountain giants’ attacks and the frost, even if they break through Midgard itself. As pay he requests goddess Freya in marriage, and the Sun and the Moon also.

The gods accept under the condition that he finishes his job in just one winter without the help of any other man, or he’ll not receive pay. The Builder accepts, but he asks for permission to use his stud horse
“Svadilfoeri”, something that is granted to him, taking the advice of the mischievous god Loki. The treaty is made with solemn promises made by both parts. The Builder begins working. “Svadilfoeri”, who works
during the night dragging stones, has twice the strength of the Builder, and at the beginning of the Summer everything indicates that work will be made on time, moment on which gods realize of the terrifying panorama
that opens on them: not only they can lose Freya, but also the sources of light from the world. They blame Loki by his bad advice and force him to think up the way of impeding the Builder to finish his work on time.

Loki’s solution to the problem is simple: he transforms into a mare. That night, when the stud horse begins working, he takes him to a place far away. The two horses frolic in the foresta ll night, which delays the working of the fortification. The Builder, on the perspective of losing his pay, enrages so terrifyingly that the gods notice that he’s no man, but a mountain giant. They forget the treaty and summon Thor, who raises his hammer Miollnir (Mjöllnir) and destroys the giant’s skull.

This is the end of the story, but an epilogue exists: Loki, in his mare form, has mated the stud horse and breeds a magnificent eight-legged colt that will end up becoming “Sleipnir”, the best of all horses and
Odin’s mount.

That’s all for today, in the next Hyperborea Exists update we’ll give way to a deeper approach on Odin and the main tales that revolve around one of the most influential figures in the Germanic tribes and who nowadays has a big presence in traditions, languages and people in Europe.

Note. You can find some of the info included in this series of chapters in the book Mythology/: Myths, Legends and Fantasies/ by Global Book Publishing, a great work to introduce yourselves into the general
mythology of every culture in the world.
Posted by J. Hågensen at 2:09 PM